Runners unite!  This is an especially important standard.  We are almost there!  There are 12 standards in total.  Everybody at some point has had an issue with the topic we will discuss today.  Whether it’s from a hobby, sport, waking up, standing, etc.  This standard affects us all throughout our lives.

Staying active as a runner or whatever

your activity, is the key motivation here.  Instead of becoming sedentary and picking up the crossword puzzle out of the New York Times as your hobby, I’d like you to be able to stay active. Running or training through pain or injury will only get worse over time and isn’t any fun anyway.

Almost all of us have “hotspots”.  It’s that burning feeling in your heel, the throbbing in your knee, or aching in your tight hip when you train.  You brush it off as an ache and pain and normal for getting older.  Some days it’s worse, some days it’s better. When you keep pushing and grinding your way past injuries, your body will eventually shut down.  Usually it will damage other parts of your body on it’s way to doing this.  There’s a mechanics problem or dysfunction of some sort that is screaming to get some attention from you.  Runners are notorious for being able to continue through extraordinary amounts of pain to finish a race.  Great job on the mental toughness.  Now start using  your noggin and taking care of yourself.

Dr. Starrett states, “If you feel pain during or after moving, then what you were doing was not functional movement”.  Do not wait around until it debilitates you from your everyday mundane activities.  Here’s Dr. Starrett’s comparison model:

This technique is called “voodoo” because it attacks a swollen joint or dinged muscle in a broad spectrum of ways.  Why it works may not always be understood.  But it DOES work.   The VooDoo Floss Band can be used as compression for swelling, or for reviving an achy, painful joint/area.  According to Dr. Kelly Starrett, here are some ways that it can help:

Some things to keep in mind:

Here is what it would look like to wrap the knee: 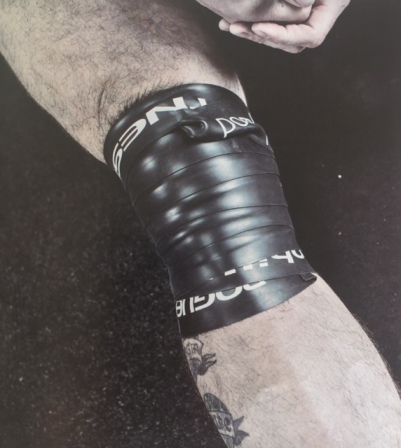